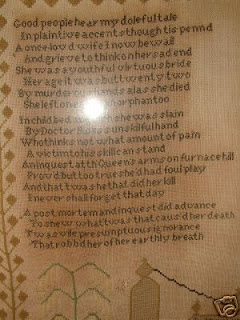 I've never seen a verse like this. This is a sampler from ebay: snipurl.com/171b9

That *is* interesting! I've never seen a verse like that either...

Wow, what a fascinating sampler! Thanks for sharing the link and verse. Very interesting.

What a sad poem and memorial sampler. This is what is so wonderful about samplers. They catalogue the history of ordinary people's lives. I can't even begin to imagine what this unskilled Doctor Ross did to this poor young wife!
Warm wishes Angela