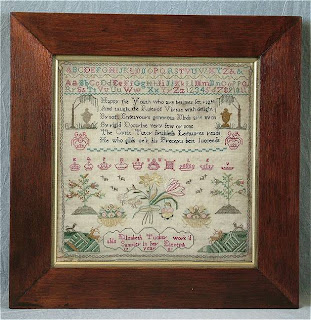 Needlework samplers were popular in the 19th century and some of the most common verses on samplers had to do with Virtue. Virtues are character traits valued as being "good". The Catholic church taught the seven deadly sins which are: Pride, Greed, Lust, Wrath, Gluttony, Envy and Sloth. The corresponding virtues are Humility,Charity,Chastity,Temperance,Kindness and Diligence 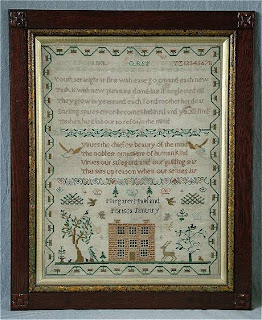 A typical sampler verse about virtue: 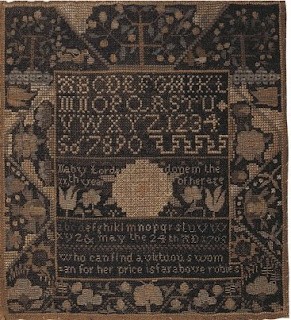 Women in the 19th Century were regarded as very different in character from men. Men were perceived to be dominant, assertive and materialistic. Women were thought to be religious, submissive and domestic. 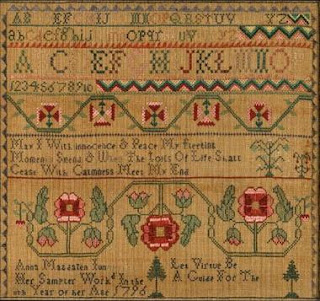 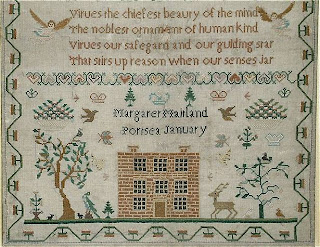 19th Century women were expected to be the "Handmaids of the Gospel" and to help direct the course of sinning men. Women were thought to naturally possess traits of goodness, simplicity and piety. 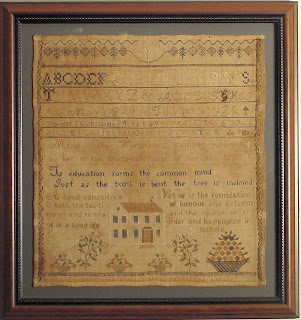 " A good conscience is both the testimony
and reward of a good life.
Virtue is the foundation of honour and esteem
and the source of an order and happiness in nature" 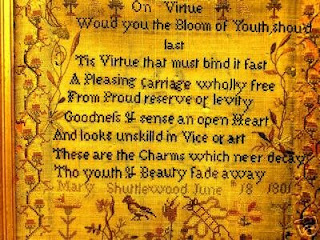 Purity was expected before marriage and women had the role of maintaining her purity against the assault of the dominant and aggressive male. A book entitled "The Young Lady's Friend" (1837) advised women to "Sit not with another in a place that is too narrow; read not out of the same book; let not your eagerness to see anything induce you to place your head close to another person's." 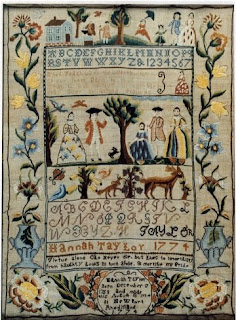 On Virtue
"Would you the bloom of youth should last
Tis virtue that must bind it fast
A pleasing carriage wholly free
From proud reserve or levity
Goodness & sense, an open heart
And looks unskilled in vice or art
These are the charms which ne'er decay
Though youth & beauty fade away" 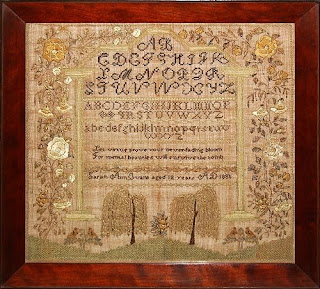 Stitching verses about virtue were designed to help young girls learn what was important in their society and what was their role and duty in life.

On Virtue:
"Go on dear child and still what e'er you do,
With steadfast steps fair Virtue's path pursue,
In each event her still small voice attend,
And let her be thy first thy dearest friend,
Follow her steps,and she will tread the road,
That leads thro Nature up to Natures God" 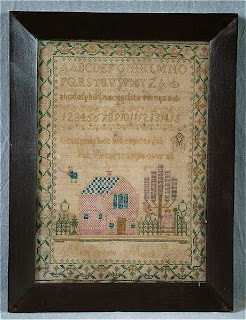 "Learn by the Bee from each event to find
Some hint of use or profit to your mind
Nothing so small but you may draw from thence
Improvement for your Virtue or your Sense
Honey like this life's evils will assuage
And yield you sweets in your declining age".

Here is a sweet little pillow from Patty 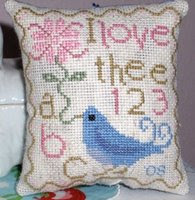 This beautiful pinkeep was made by Florence 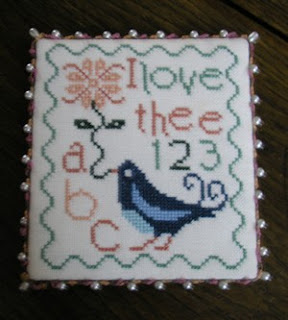 This amazing hornbook is from Yuko 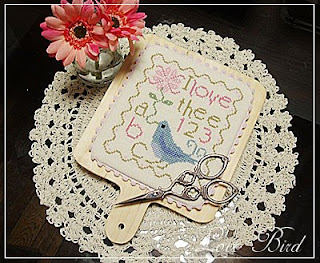 This is from Petra Thank you everyone who has sent me a photo, I love seeing all the different things that are being done with this freebie.