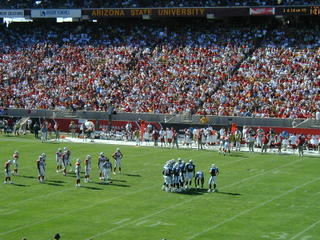 Years ago my son's 6th grade teacher was so excited that Krispy Kreme doughnuts built a store in town. She told me "when I'm in that store I'm with people who are just like me. I feel so comfortable there." I assume she would have felt completely out of place in a health food store.

My friend Connie came to visit recently from Nashville. We used to work together years ago and were pregnant with our boys at the same time and have stayed in touch ever since. She's a rabid Tennessee Titans fan and got us tickets to see the Phoenix Cardinals and the Titans play. For me, football is remembrances of hearing the crowds on TV screaming when my brothers and dad would watch the games on the weekend. To say that I am not a fan is to put it mildly. I don't even understand the game. A football game to me is a health food store to my son's 6th grade teacher.

Connie's enthusiasm was contagious though. Despite the amount of testosterone in the stadium, she was in her element. This was her Krispy Kreme store. She brought us both Titans jerseys to wear to the game, she had temporary tattoos that she wore and even Titan earrings. She was thrilled that my sneakers matched the Titan colors, though I certainly didn't plan it that way. Here she is 45 minutes before game time: 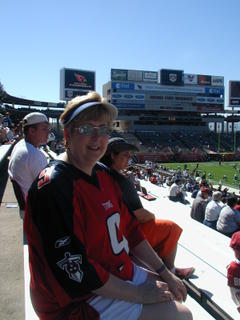 She had a poster made because the game was on CBS. It said:

McNair being the Titan's quarterback. Sadly, he had an injury and didn't show up at the game. But that didn't ruin her enthusiasm though the 90 degree heat was fixing to ruin mine. Especially when I learned football games last 3 hours. How they last 3 hours when each quarter is only 15 minutes long is still a mystery to me. I learned the man in the green cap signaled a commercial when he stood on the field but the commercials certainly weren't 2 hours of the game. As I said, I know nothing.

I do like to people watch and that was fun, in fact I probably missed most of the important bits of the game in being distracted by the people around us. The young couple who were pregnant, thank goodness the two huge beers he bought were for him and the friend next to him. The man in front of us who had a freckled neck like my brother and couldn't stop screaming "Cardinals!!!!!!" every 15 seconds. His enthusiasm started after his second beer. I wondered if he'd be able to talk the next day. And the cutest sight of the day, the dad with his son who must have been four. He had a sparkly cardinal painted on his left cheek and a Cardinal jersey to match his dad's. They left halfway through the game, maybe to seek a seat in the shade rather than the full sun or maybe 3 hours was too long for a 4 year old, I know it was a tad too long for me, but then I'm over ten times his age and don't understand football.

I do wish they had marching bands during the halftime in pro games, that must only be for college games. The cheerleaders were cute, the fireworks with each Cardinal touchdown were exciting and I was amazed that the crowd noise sounded just like the noise from TV football. Maybe I assumed that sound was really like a TV laugh track? It just struck me that it was for real.

Unfortunately for Connie, the Titans lost 20-10. But we had a great day anyway. She told me of an elderly lady she sees at the Titans home games. She sits in the same place and is at each game. She also found her working as a volunteer in the gift shop at the hospital where she works as a nurse. Behold your future Connie...and thanks for a great day.

What a crack-up! I love the way you write. I feel like I was at the game!

I *love* football but I completely agree with your assessment of pro games. They are BORING in person. I attended one and wished the entire time I had some stitching with me. I grew up going to college games. For me, good football is played outside in a cold rain with the band playing the fight song so loud that you can't hear the person next to you. Pro football is fun, but it isn't *real* football. :o)

What I enjoy about going to any kind of game is the people watching. I don't fully understand all of the rules of any particular sport. I just hear DH screaming 'THROW THE FLAG!!!!!!' a lot when football is on our tv.