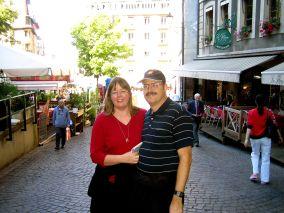 Whenever I travel, I find it hard to believe that I can be plopped down fairly quickly and easily in a completely different setting from the place I just left the day before. It's almost surreal.

We returned from Switzerland recently and the differences between where I left and where I went were extreme. I left 100 degree dry heat, adobe type houses with weeds that are left in place just because they are green and went to a country where everything is neat as a pin, flower boxes are in every window and the temps at the time were 20 to 30 degrees cooler than home. The cars are smaller, people actually walk or bike everywhere, public transport is superb, dinners last for hours and the table is yours as long as you want, and the people are multi-lingual.

We traveled by planes, trains, buses, trolleys and gondolas and every bit of public transport was spotless. Zooming through the Swiss countryside by train I wondered if Disney had designed the path as it looked too beautiful to be real. Not a piece of grass was out of place, flowers bloomed in every window box and gardens were rampant. Our hotel rooms sparkled and I joked we could have eaten off the bathroom floors. People were helpful and all the public transportation was on time to the minute. Swiss precision and Swiss engineering and Swiss timing are legendary and definitely not a myth. The trains were so smooth I felt like I was gliding and even in the gondola traveling up into the Alps while dangling thousands of feet in the air, I felt like I was in good hands.

We spend a lot of time in Mexico and wondered to ourselves how two cultures could be so extremely different. There is no way I would trust dangling in the air in a Mexican designed gondola (is there such a thing? I doubt it...). The country is not neat as a pin, if things get done, they get done on "Mexican time" which is to say, maybe they'll get done and maybe not. Quite a few years ago we had a front door installed in the Mexican house and it took the workers all day to install it using a hammer , screwdriver and a chisel, no other tools were in sight. That door was crap, it never worked right, always stuck and scraped along the floor, it was hung wrong and was a pain to use. I can't imagine the Swiss ever giving the A-OK to indicate that a good job was done on that door.

In trying to be fair to Mexico, it's a large country that is only now starting to get a middle class. The climate is hot, and not conducive to wanting to do a lot of work in the heat. Switzerland is about the size of Arizona and is a prosperous and stable modern market economy that is well educated. Their unemployment rate is 1.8 percent. Mexico's unemployment is officially double the Swiss rate but more importantly "underemployment" is at least 25 percent. We have only to look at the rush of people trying to illegally cross the border to know that times are hard and have been hard for years in Mexico.

But people are the same everywhere and we found the Swiss to be just as welcoming as the Mexican people. Their countries are different but both are proud of their heritage and both are interesting countries to explore.

And lest one think that Switzerland is the most idyllic place, as I was beginning to believe during most of my trip, it took one stop in Zurich to realize that all countries have a seedy underbelly and the Swiss had theirs displayed for all to see in their national museum.

Carefully placed along the walls in the beautiful medieval art section of the museum was a powerful photographic exhibit of four Swiss drug abusers, a no holds barred look at drug abuse in the Bern area. And while I really wanted to concentrate on the medieval art, the photographic images kept pulling me over to have a look, sort of like a horrible accident that you slow down to view. These weren't the images I was expecting in a museum that showcases all that the country cherishes, all the items that are beautiful and spectacular and represent hundreds of years of Swiss history. But they are the images I brought home in my mind and they answered the question that I had, yes, Switzerland has its share of problems just like any other country and there is no country on earth that is free from trouble and heartache and pain. It was a little like finding out there is no Santa Claus but it was also a relief to realize this country wasn't as unreal as Disneyland, no matter how clean and tidy.