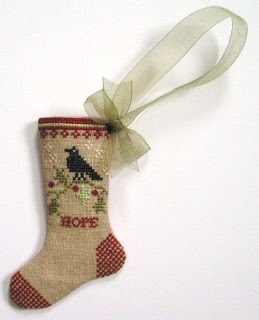 Here is my contribution to The Attic's Christmas ornament silent auction and was a really fun, quick stitch. It is in the current 2008 JCS Ornament Issue and was designed by Blackbird Designs. The auction will take place this Saturday, November 22nd. This auction never disappoints with many, many lovely ornaments up for bid. All proceeds go to the Breast Cancer Research Foundation.

As Jean states in her newsletter, "We know that many of you cannot participate in person, so all of the donated items received thus far will be photographed today (Nov. 18) and put in e-mails to you tomorrow ~ and uploaded to our Web site just as soon as our Web master can get it posted. Through Friday you may bid by e-mail. Please use this e-mail address (jeanlea@cox.net) to do that and put AUCTION BID in the "Subject" line.

Because there will be no one reading e-mails on our busy Saturday while we make final preparations for the evening's event, beginning on Saturday please submit your bid by calling our toll-free number prior to 4 p.m. MST, 1.888.94-ATTIC (1.888.942.8842)". Here is The Attic's website.

My thanks to Deb Hunter for a beautiful job of finishing this piece. 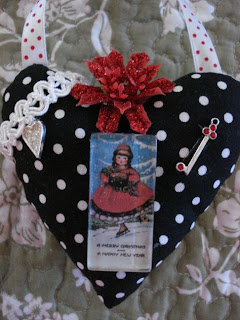 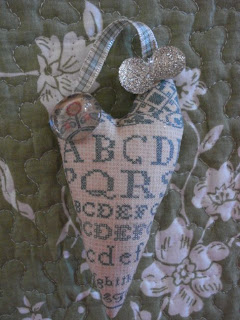 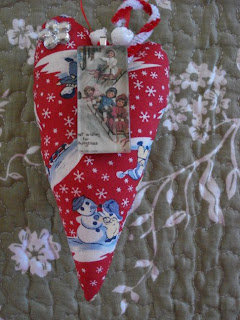 I was thinking ahead to Christmas today and realized it's really not that far away. I wondered what else I could do with my ice pendants and came up with these 3 heart ornaments. They would look better hanging straight on a tree rather than laying flat but it's a bit too early for the tree yet! Let me know what you think! 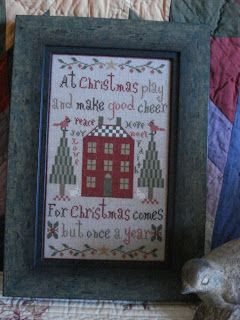 I just released a new design called Christmas Cheer and I hope you'll like it. This is a bit better photo than what is on the chartpack which was a roundabout mistake but I went with it as I didn't want to waste all the prints I had! Anyway, enjoy! 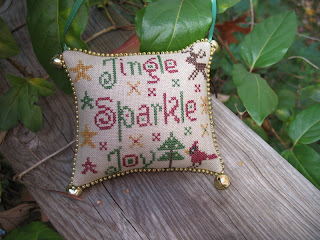 This is from Carol, I love the finishing. 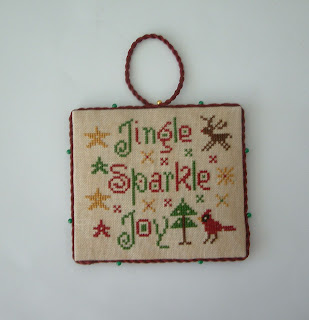 The Sociopath Next Door

I've been doing a lot more reading than stitching lately and have been particularly interested in books about personality disorders. This was one of the best of the group. Basically, sociopaths are people without a conscience, people who can do anything and not have guilt or remorse. But contrary to what many think, not all sociopaths are making lampshades from human skin, nor are they only dictators of small countries. There are many shades and flavors of sociopaths and the one I wanted to talk about is the "covetous sociopath". Oh my, I've met her! In fact, I'd swear one of those pairs of eyes on the book cover are hers.

Sociopaths do not always have a covetous nature, but when they do, a fascinating and frightening picture emerges. Since it is simply not possible to steal and have for oneself the most valuable possessions of another person ie: beauty, intelligence, success,or perhaps a strong character the covetous psychopath settles for besmirching or damaging enviable qualities in others so that they will not have them, either, or at least not be able to enjoy them so much. Here the pleasure lies in taking rather than in having.

The covetous sociopath thinks that life has cheated her somehow, has not given her nearly the same bounty as other people, and so she must even the existential score by robbing people, by secretly causing destruction in other lives. She believes she has been slighted by nature, circumstances, and destiny, and that diminishing other people is her only means of being powerful. Retribution, usually against people who have no idea that they have been targeted,is the most important activity in the covetous sociopath's life, her highest priority.

Since this clandestine power game is priority number one, all of the covetous sociopath's deceitfulness and tolerance for risk are devoted to it. For the sake of the game, she may devise schemes and perform acts that most of us would consider outrageous and potentially self-destructive, in addition to cruel.

And yet when such a person is around us in our lives, even on a daily basis, we are often oblivious to her activities. We do not expect to see a person direct a dangerous, vicious vendetta against someone who in most cases has done nothing to hurt or offend her. We do not expect it, and so we do not see it, even when it happens to someone we know or to us personally. The actions taken by the covetous sociopath are often so outlandish, and so gratuitously mean, that we refuse to believe they were intentional, or even that they happened at all. In this way, her true nature is usually invisible to the group. She can easily hide in plain sight among genuinely intelligent, professional people.

When people do not provoke in the sociopath a desire for something they have, or for something they are, then she does not target them. To the contrary, she may be especially charming and courteous when she believes that certain underlings, as she thinks of them, are useful in maintaining her sheep's-clothing disguise, a disguise that includes a presentation of herself as an extraordinarily nice, caring, responsible, and pitiably overworked person.