Hello long lost needlework friends! It's been so long that I wasn't even sure I remembered how this blog worked, in fact I believe it's going to take a bit of time to get me up to speed.


I've been hearing that some of you know I am designing again and if you heard that, you are right! I have about 8 new samplers finished and am at the stage of formatting, framing, photographing and all the other loose ends of getting things going.


About 5 years ago, my computer hard drive died. Yes, some of my patterns were saved on an external hard drive but not all and frankly, not the ones I really wanted. At the time I was going through a rough bout of empty nest syndrome as both my children left home for college at the same time. It took a while to get used to it and I was thoroughly down about it and not up to doing anything about my patterns until this year actually. And suddenly, I got bitten by the stitching bug again and here I am, back and hopefully not forgotten. My plan is to open an Etsy shop soon. In fact, I thought it would be later this month but issues with framing have cropped up and that timeline will have to be pushed further away.

I was hoping to have my latest samplers there but that story will wait until tomorrow's post which is about framing issues. Yes, bold type for a serious issue! In the meantime, I will show you a couple of the latest that were successfully framed. This is Suzy Moo's Sampler: 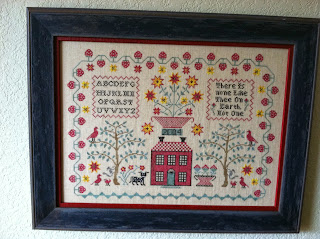 I challenged myself to design a cow and Suzy was the best I could do. I am not an artist, I simply wing it as best I can. Someone asked me, "Is that a dog?" and I was going to name this "No, That is Not a Dog" sampler. Then a good friend said I should give her a name and started throwing out names like Suzy Q, which is pretty adorable, and eventually she became Suzy Moo. The verse is appropriate, "There is None Like Thee on Earth, Not One". I found that on an antique sampler and it was fitting, there truly is none like Suzy Moo, the polka dot cow, on earth.


This is a sampler that survived the crash of '09 and is one I was wanting to release and then just put aside after it was stiched. It's simply called "Time". 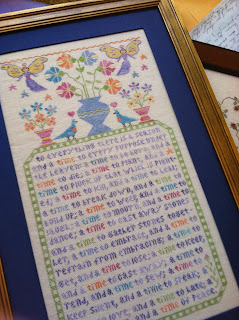 And look what a fabulous framing job was done by Aaron Bros.

They wrapped the mat with silk fabric which is lovely in person. Suzy Moo was also framed by them, quick and no problems. I like that in a framer.

As I said, we will talk about framing tomorrow, the good, the bad and the really bad. Yes, Hobby Lobby, I'm looking at you. Again bold because they seriously messed me up.

And last but not least, I think I left the blog shortly after posting my "Seven Sins and Seven Virtues" sampler. Another lost to the crankiness of my hard drive. However, where there is a will there is a way and this past week I found a printout of the colors I had used in this piece and spent 8 hours going pixel by pixel from my framed piece and reproduced it in Patternmaker. That was a good day and I felt quite accomplished when I was done. My eyes don't thank me for that since I stitched it on 40 ct fabric. 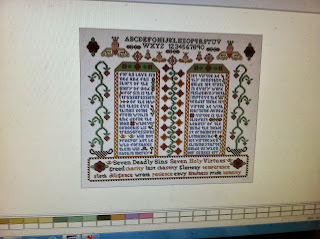 Back tomorrow with more.

Welcome back! What lovely pieces you have shared with us! I really like the colors in the first one.

PS Sorry to hear about your framing troubles.

Thanks Robin, I am glad you commented especially because I came back and figured out the paragraph break option, lol.
You'll hear more about my framing troubles tomorrow, oh joy, something to look forward to huh?

So glad you are back!

What darling designs! I'm in love with that second framing job. The silk looks lovely. :)

Hooray and welcome back! I'm thrilled to hear you will be releasing more designs! Sorry to hear about your framing troubles - it's so hard to find a good framer!

A most welcome blast from the past! Great to hear you are designing again!

I am so excited to read that you are going to make your designs available again! how wonderful to share your gift! thank you!

Glad your back Deborah and can't wait to see what you have designed!

Deborah, I hope you get this because I am not use to the blogging sites. I lost my daughter 6 years ago and I am looking for a cross stitch memorial pattern to make in remembrance of her. Do you have anything like that? I was just reading about the book you found. I know how that mom felt with losing a child. Thanks for any and all help!